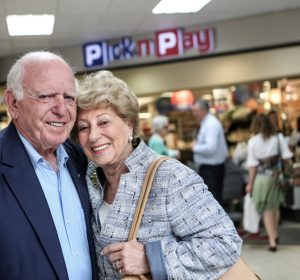 Raymond Ackerman is one of the most successful businessmen and philanthropists  in South Africa. He is best known for the supermarket chain store Pick n Pay, which he bought from Jack Goldin in 1966. It is no secret that Raymond Ackerman is considered to be one of the wealthiest businessmen in South Africa. In fact, he was classified as one of the top 50 wealthiest men in Africa, with an estimated net worth of 500 million.

There have been rumors that much of Raymond Ackermans wealth can be attributed to his investment and endorsement of cryptocurrency. We decided to check whether there is any merit to these rumors.

How Many Pick n Pay Stores does Raymond Ackerman Own?

The Pick N Pay group is a supermarket chain with more than 870 stores in South Africa,

Zimbabwe and Australia. In South Africa, Pick N Pay faces its most fierce competition from the Shoprite Group and Woolworths. Recently, Food Lovers Market has also proven to be a growing competitor. Ackerman is renowned for being a consumer champion. Although he no longer owns executive responsibilities at Pick N Pay, he and his family own about 48% of the stock. Ackerman’s son Gareth is now the Executive chairman, with Richard Brasher in the position of CEO. In 2018, Pick N Pay’s estimated revenue was set at R83.5 billion.

Raymond Ackerman was awarded an honorary doctorate in law from Rhodes University in 1986. In 2001, his alma mater, UCT, awarded him an honorary doctorate in commerce. He was voted 79th in the Top 100 Great South Africans in 2004. He was also named by the Financial Times as the only South African among the world;s 100 greatest business leaders. Raymond, together with his wife Wendy Ackerman were awarded the 2010 David Rockefeller Bridging Leadership in Africa Award by the Synergos Institute. Raymond Ackerman also founded The Raymond Ackerman Academy (RAA) in 2005. This Academy offers a six-month full-time training programme to youths on entrepreneurial development and runs twice a year through the UCT Graduate School of Business.

No. Raymond Ackerman acquired most of his wealth from owning the Pick N Pay chain of stores that has now expanded exponentially. As mentioned before Pick N Pay’s estimated revenue is set at R83.5 billion. Pick N Pay owns a 49% share of  Zimbabwean supermarket business. The company employs more than 38,000 people and operates stores under the Boxer brand in South Africa and Swaziland. There are also stores in Australia. We have found no evidence that suggests that Raymond Ackerman has invested in cryptocurrency nor has he endorsed cryptocurrency.

Who Accepts Bitcoin as Payment in 2021?

A survey conducted in 2020 by HSB revealed that 36% of small-medium businesses in the US are now accepting Bitcoin. These businesses include Wikipedia, Microsoft and AT&T. It is also reported that Burger King Venezuela has partnered with Cryptobuyer to accept cryptocurrency as a mode of payment. Customers have the option to pay in Bitcoin, Dash, Litecoin and Ethereum. There have also been reports of several Subway branches who accept Bitcoin as payment for their sandwiches. PayPal is now allowing its users to accept and hold Bitcoin. The world-renowned auto-maker company, Tesla, recently announced that it bought $1.5 billion worth of Bitcoin and will soon allow its customers to pay for its electric vehicles with Bitcoin soon.

There are many more companies who have started adopting Bitcoin as payment options for goods and services, but the cryptocurrency still has a long way to go, as many countries are still not accepting of the cryptocurrency. We do predict that this will change in the near future.